The OBS warmly welcomes Ayya Medhanandi to Quaker House this coming Friday Evening, May 5th following the winter retreat. Years ago, in an interview, Women at the Forefront with Jayanta Shirley Johannensen I read about the pioneering journey of this woman in the dhamma. It is a moving account that displays Ayya’s surety, her resolution and her trust in “…waiting for (her) karma to ripen and in (letting) conditions unfold naturally.”

Born of Eastern European refugees who emigrated to Montreal after World War II, Ayya’s spiritual quest has led her to India, Burma, England, New Zealand, Malaysia, Taiwan, and finally, back to Canada. Inspired by Mahapajapati, the step mother of the Buddha who successfully requested bhikkhuni ordination and later became an arahant, she too, was “drawn to a greater level of renunciation”.

Over three decades later, Ayya’s ‘quest’ and hard labour, along with that of Ayya Nimmila, Sister Ahimsa, Samenari Annuruddha and many others, has led to the establishment of a fledgling Bhikkhuni / women’s Sangha at Sati Saraniya Hermitage near Perth, Ontario.

Our Ottawa Buddhist Society community is grateful to be firmly grounded in the Theravada traditions of Sri Lanka, Thailand and Vietnam. As we pause, individually and collectively, to consider this ripening of our karma we are surely blessed to have an Ayya Medhanandi inviting us to visit their forest meditation hall to “still the heart and dedicate the goodness to our loved ones and to all beings everywhere “  For more information : Sunday Afternoon gatherings at Sati Saraniya Hermitage 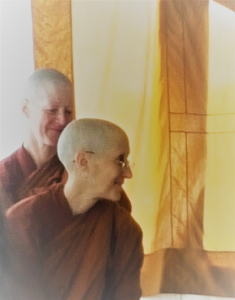 Wednesday May 3– Waxing half moon 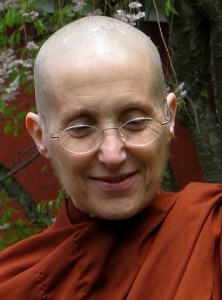 Ayyā Medhānandī Bhikkhunī, is the founder and guiding teacher of Sati Sārāņīya Hermitage, a forest monastery for women in the Theravāda tradition.

In 1988, at the Yangon Mahasi retreat centre in Myanmar, Ayyā requested full ordination as a bhikkhunī from her teacher, the Venerable Sayādaw U Pandita. This was not yet possible for Theravāda Buddhist women. Instead, Sayādaw granted her 10-precept novice vows on condition that she take them for life. Thus began Ayyā’s monastic training in the Burmese tradition.

When Myanmar was closed to foreigners by a military coup, in 1990 Sayādaw blessed her to join the Ajahn Chah Thai Forest Saņgha at Amaravati, UK. After ten years in their siladhāra community, Ayyā felt called to more seclusion and solitude in New Zealand and South East Asia.

In 2007, having lived as an alms mendicant nun for nearly 20 years, she received bhikkhunī ordination at Ling Quan Chan Monastery in Keelung, Taiwan.  In 2008, on invitation from the Ottawa Buddhist Society and Toronto Theravāda Buddhist Community, Ayyā returned to her native Canada to establish Sati Sārāņīya Hermitage.

Monday May 8th – Registration for Ajahn Punnadhammo Non Residential Retreat June 3 & 4 : Early bird Registration for OBS Members begins. Please see the registration page on the OBS website for all information regarding this annual retreat and the date for the general public registration HERE 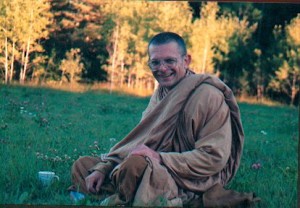 Ajahn Punnadhammo is the resident bhikku at Arrow River Forest Hermitage, a Theravadin Buddhist monastery and meditation centre located fifty miles southwest of Thunder Bay. Venerable Punnadhammo has been studying and practicing Buddhism since 1979. He began studying the dhamma under Kema Ananda, the founder and first teacher at the Arrow River Centre, and did a one year solitary retreat at the Centre in 1988.

After this he went to Thailand and was ordained in the forest tradition of Ajahn
Chah in 1990. Between 1990 and 1995 he was based at Wat Pah Nanachat, Thailand, and in 1995 was asked by Kema Ananda to return to Canada to assume the management of the Arrow River. He has been there ever since. Venerable Punnadhammo is Canadian, born in Toronto in 1955. www.arrowriver.ca

Saturday May 13th – Vesak Celebrations at Tisarana Monastery. For more information about this day of celebration of the Buddha, please visit the Tisarana web site HERE

Sunday May 14th –  OBS Soup Kitchen at Shepherds of Good Hope.
The meal service at the Shepherds of Good Hope  enables us to contribute to the community at large and socialize at the same time. Ann Waters is coordinating volunteers. If you are interested in helping please contact Ann at socserv2014@ottawabuddhistsociety.com

Thursday, May 18th – Waning half moon

Venerable Khemako was born in Phoenix, Arizona in 1959 into a large Catholic family and received his primary education from priests and nuns at the local Churc h-run school. His long-standing interest in the core questions of philosophy and religion led him to begin lay Buddhist practice in 1997. As his practice and faith in the Dhamma increased, his interest and involvement in lay life waned. Ven. Khemako trained for two years as an Anāgārika and Sāmaṇera, ordaining as a Bhikkhu on June 2, 2012 with Ajahn Pasanno as preceptor. In June of 2014 Ven. Khemako moved to Tisarana. During the winter of 2016 – 2017, Venerable Khemako stayed at Arrow River Hermitage.

We are always looking for OBS Volunteers to help out with driving Monastics to and from Perth and to host their overnight stays in Ottawa between teaching events. (In particular we are looking for male drivers and male hosts that live in a reasonably central location.) If you are interested in helping out please email Vivienne for more details at mons2014@ottawabuddhistsociety.com

Providing food items for the nuns at Sati Saraniya and the monks at Tisarana:

You are warmly invited to bring dana support for the nuns at Sati Saraniya and the monks at Tisarana by bringing non-perishable food items that don’t require refrigeration. A food collection basket will be available at Quaker House on May 5th and May 19 th and at the Day of Mindfulness on May 20th for your donations. Thank you all.

The OBS executive board often receives requests to make announcements in the OBS Newsletter from Buddhist individuals and groups within the Ottawa area. In a spirit of mutuality with others, we created an OBS Blog page, – Larger Community Bulletin Board and OBS Biographies.   For inclusion and details please contact comms2014@ottawabuddhistsociety.com

The Contemplatives Craft
by LP Viradhammo

In commemoration of LP Viradhammo’s recent 70th birthday, the Forest Sangha has published The Contemplatives Craft, a collection of his more recent dhamma talks. This collection is freely available for download HERE 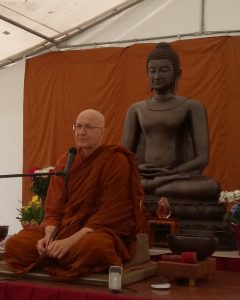 LP Viradhammo and the new Buddha rupa for the future Tisarana temple commissioned by Wanchana Manawapat, the wife of the former Thai Ambassador to Canada, Pisan Manawapat

“.. Becoming conscious of the inner world is a vital part of our awareness practice. How often do we feel frustrated about something, and then just continue feeling that frustration without truly awakening to it? Awakening to it means saying to ourselves, “This is frustration; frustration feels this way.” So we become fully aware of how frustration feels in the body. We can become more conscious of a difficult mind-state by dropping the  associated with it, and instead feel how that mind-state manifests as tension in the body. In this way, we become more objective towards, and less attached to, the mood of the mind. Although the frustration is still there, this more objective perspective allows us to apply effort in the direction of transforming that unwholesome mental state into a more wholesome one, rather than heedlessly following it in an ill-considered way.

If we don’t put any effort into becoming conscious of the inner life, we can get enmeshed in a whole range of reactions to a particular state of mind, including that of self-judgment for feeling this way to begin with. Life is a kind of interplay between what we sense and how we react, isn’t it? Life comes at us through the senses, through memory, and then there’s a response to this and a reaction to that. If I have no awareness of this impersonal process, then I’m simply a victim of habit or circumstance. And there’s no freedom in that. But if we can have the presence of mind to know, for example, that “This is uncertainty; this is how uncertainty feels,” then this gives the wisdom part of our mind a chance to operate skillfully….”
– Ajahn Viradhammo, in Learning to Bookbind, Learning to Practice
The Contemplatives Craft 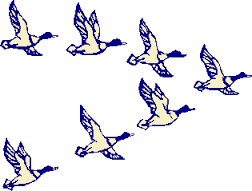